This is another Cariboo Handwoven blanket story. One of my deluxe wool blankets with about 50% handspun wool arrived in Toronto recently. Here's the blanket: 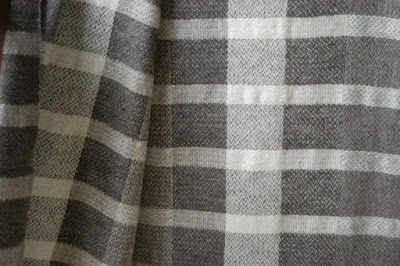 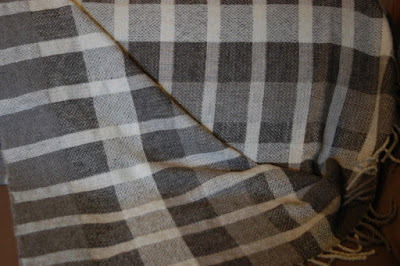 And here's the buyer's response:


Hi Jane,
I picked up the blanket package yesterday and we are thrilled.  You are amazing.  To think that you spin the wool and weave it into that beautiful blanket is truly wonderful.  Your finishing of the fringes is so perfect as well.  Would the colours be natural or have you dyed them?   The blanket will make a very special wedding present – thank you.

My Dad truly loves Georgian Bay and everything about it, and so I made him a Georgian Bay towel for a milestone birthday earlier this year. He was so thrilled and delighted that he ordered three more to give as gifts. It was pretty weird to send my wonderful Dad an invoice with his order, but he was expecting it and I added a second gift towel for him. :-)

My Georgian Bay towels are designed to show the water with whitecaps, rock with orange lichen, evergreen trees, and big sky with cumulus clouds.

And then one of my Dad's friends who received a towel requested six Georgian Bay towels to also give as gifts! I was about to plunge into making more towels right about then, so I added this order to the project. Each towel is differently designed but has the same motif of water, rock, trees and sky. (Some of the sky in the towels below is hiding behind the railing.) 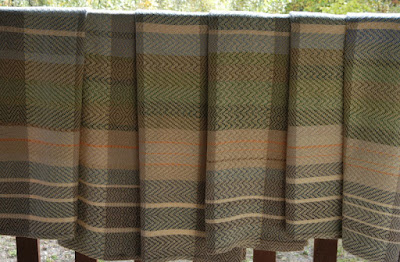 These are going in the mail on Monday. I'm looking forward to carefully packaging them up and sending them on their way - to another Georgian Bay fan.

A friend of mine bought a wool blanket back in March 2013 and has used it lots and enjoyed it a great deal. I was really happy to see a photo on Facebook in which she and her two young grandkids are cuddled up under it and reading together. This blanket was woven in twill blocks and the weft has two colours going all the time, giving it quite a textured and interesting look.

Here it is before washing: 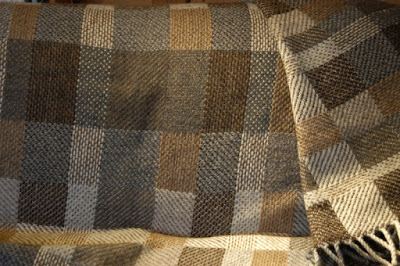 My friend was recently at my studio to buy some towels, and she'd brought her blanket after remembering my offer to all blanket owners that I'll happily hand wash it when they'd like. I have to officially recommend dry cleaning, but gentle and careful hand washing is actually better for the fibres, and it will plump them up and soften them a little. 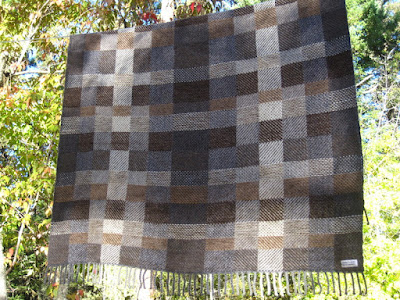 This was all very helpful for me to see: a blanket after over two years of use - very nice, no wear or problems - and how it looked after another washing. Even better!

Update: The blanket owner emailed me after receiving her blanket back and said:

"The blanket looks better than ever (if that is possible). I can’t wait to snuggle into my favorite chair with it this evening. Thanks for the tender loving care, Jane."

Email ThisBlogThis!Share to TwitterShare to FacebookShare to Pinterest
Labels: User Feedback, Why

Busy weavers accumulate a fair bit of "trash" in the form of empty cones and bobbins and extra yarns from loom waste. I hate the word "trash" because I always try to find a use for anything and at least recycle the cardboard cones and bobbins.

But my supposed trash is actually a friend's treasure. She is a pre-school teacher and she loves my trash! 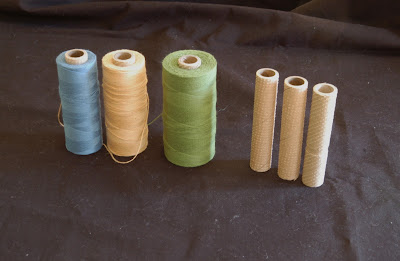 Empty bobbins from cotton are used to build things. 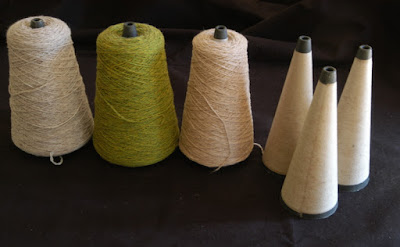 Shetland wool cones are great to turn upside down to make ice cream cones with a pom-pom on top. 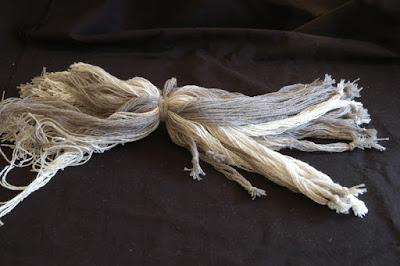 Loom waste, called thrums, is already knotted into groups for each inch on the back beam, so they're pretty tidy. And my thrums come in lots of colours. :-)

My friend has raved about how valuable my studio waste is for her young children and all their activities. She's delighted to receive my trash - and I am even happier!

Email ThisBlogThis!Share to TwitterShare to FacebookShare to Pinterest
Labels: How, Why
Newer Posts Older Posts Home
Subscribe to: Posts (Atom)