A recent studio visit by a Cariboo Handwoven blanket owner had a special moment for me. Well, the whole visit was special for me because she and a friend made a day trip to visit my studio, watch how a loom works (they were amazed) and see what I had available for sale. I was really touched that they would take a day to visit me, and I gave them some ideas for things in town to see and do before they headed home.

The blanket owner wanted a second blanket, a cotton one, and requested something in greys with a little yellow. I think that's how she put it. I had something new that might fit her idea. As soon as I pulled it down from the shelf, she knew it was for her. I just happened to have those colours and it was a quick and easy decision for her.

I just love it when someone instantly 'knows' that one of my works is for them.

Here's the blanket she bought: 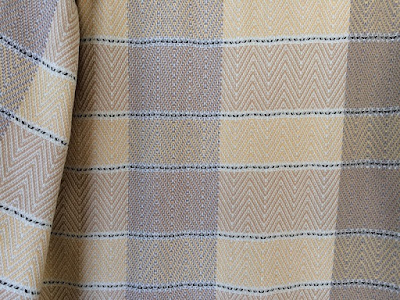 It's a fringed cotton blanket, just finished a month ago. It's gone to a good home!

To continue from Part 1 (highly recommended to read first for Part 2 to make sense), I arrived at Giuditta Brozzetti on the first day not knowing what Marta's plan was. I had suggested I could assist with a big project that she needed some help with, but she said right away that I could weave on her small four-harness loom from the 1700s. I was quite surprised actually and I really appreciated her trust in me as a weaver. She wanted to see what someone new would do on that loom.

The main feature of the studio is the array of old Jacquard looms. They produce very complex patterns based on punched cards, meaning that each warp thread is controlled individually, like a harness for each one. Unbelievable, I know! The weaver climbs above the loom to change cards. Giuditta Brozzetti's website has examples of the beautiful fabrics woven on the Jacquard looms.

Marta had two weavers working for her, a woman from Paris who spoke fluent English after her time in London, and a man from Peru with whom I communicated in gestures and very basic Italian. He liked to call me 'signora' and he was just as much help to me with the bobbin winder and advancing the warp on my loom. Marta joked that she has a multi-national studio. The Jacquard looms are quite noisy, and working beside the two of them made me feel part of the production.

My loom was apparently from 1750 and it's still working well. It's a counter-marche set-up, unlike the jack looms I've always used, and has one treadle for each harness. This required more detailed mental work for this new weaver on it, ahem. The front and back beams were held with a ratchet and pawl system, with no brake on the back beam that modern weavers expect. 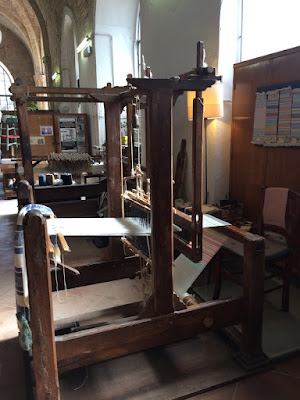 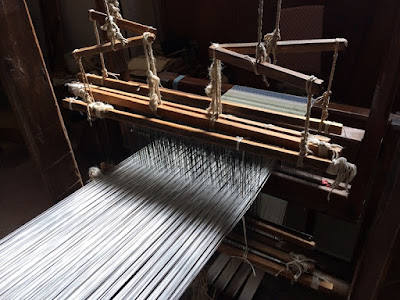 I had a lot of fun on this loom and the experience was a big 'wow' to me for the three days. I wove with gorgeous 4/68 cotton from a company in Milan. Marta and her weavers double the weft for pattern stripes to help them stand out. This is a good concept to try in my own studio. A big part of the whole opportunity was using an entirely new colour palette. 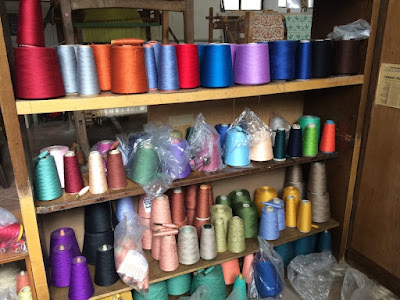 But before I could weave, I had to learn the complexities of the bobbin winder. After the main switch to the upper right (not visible in photo) is turned on, the whole machine comes to life through a lengthwise drive band to which individual winders can be engaged. Figuring out this monster took some time, but with help by the two weavers who often saw me struggling, I figured it out. 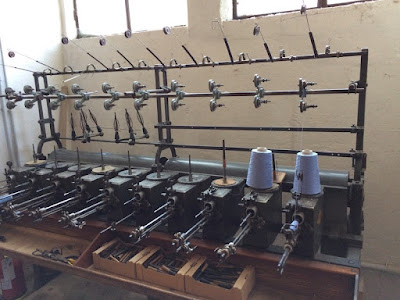 After a little practice on my loom, I wove seven samples that Marta can sew into bags, bracelets or whatever she likes. Here they are: 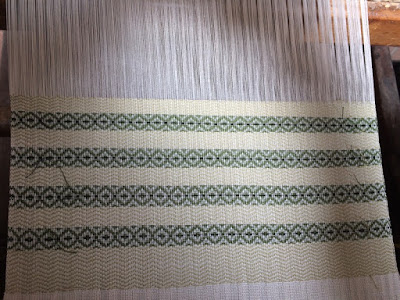 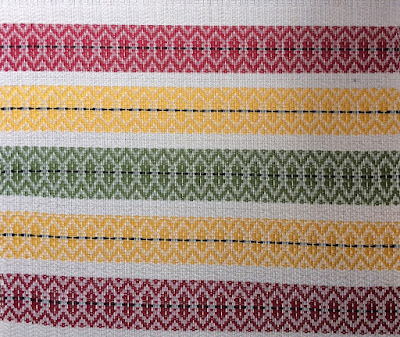 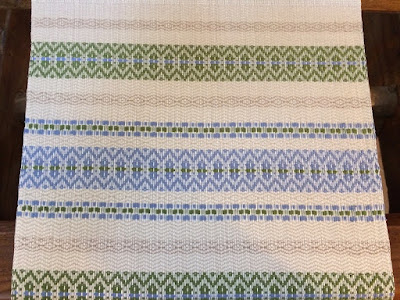 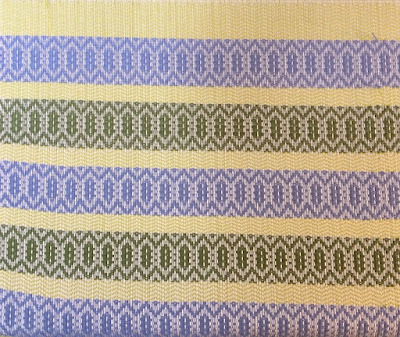 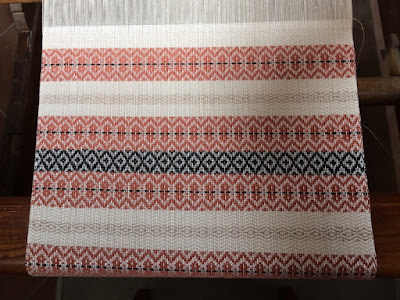 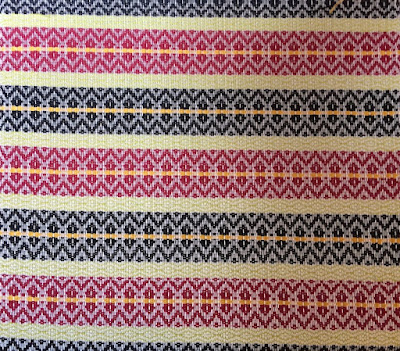 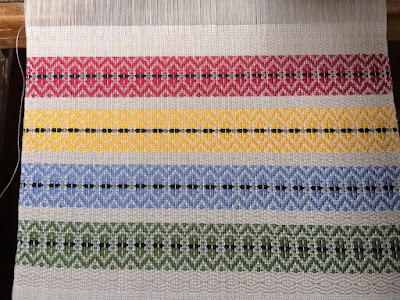 On my third day, everyone had left for lunch and I planned my last sample to finish in plenty of time to catch the train back to Arezzo. I wanted to savour my last hour in Giudetta Brozzeti. I finished weaving and tidied up, then enjoyed how the afternoon sunlight filled the whole building with beautiful soft light. I walked around to photograph, drink it in, remember. It was all so enchanting for me.

The goodbyes were hard. I could only promise myself I would be back.

Email ThisBlogThis!Share to TwitterShare to FacebookShare to Pinterest
Labels: Where

A year ago, my husband and I were in Arezzo, Italy and decided to take the train to Perugia, a fascinating city he knew fairly well. Perugia dates back to the Etruscans from several centuries BC and its university was founded in 1320. Situated on a massive hill, modern residents can take the MiniMetro from the valley floor up to the two main piazzas. The medieval street plan is pretty complicated and challenging to most North Americans used to a perpendicular street grid - and it's beautiful.


Before going last year, Pat found information online about a weaving studio and suggested we visit. It is the Giudutta Brozzetti Museum-Laboratory of Handweaving and it is one of the most incredible places we'd ever seen, augmented by the friendly, high-energy owner, Marta Cucchia. The building is the Church of San Francisco Delle Donne ("Of the Women") that was established in 1212 by Saint Francis and then passed on, originally as a monastery, to the Benedictine sisters in 1252. In more recent years, the building was used as a factory; holes in the roof's brickwork (covered with a tile roof now) were made for exhaust fumes.

Giuditta Brozzetti established the weaving business in 1920 to revive traditional weaving from the Umbrian province. Marta is her great-granddaughter and a passionate weaver. She and I kept in touch through the following year and then I said I'd be back this March. She very kindly agreed that I could spend three days in her studio.

I cannot write everything in one blog so I'm making this Part 1 and will finish with Part 2. To me, the three extraordinary days I spent with Marta and her weavers included the daily commute from Arezzo, where we stayed again, to Giuditta Brozzeti. First, I had a 20-minute walk to the train station, buy tickets and validate the first one, then I traveled on two trains in the morning with an easy connection. I next walked to the MiniMetro station and went up to the final stop, Il Pincetto. I first walked out and oriented myself (fairly familiar from a year ago and helpful with GPS on my phone) and made my way northwest for about 1.5 km. My favourite route was to walk along the aqueduct built in 1254 which became a walking route in 1812.

For a western Canadian, all these dates and sights were extraordinary and they really fired my imagination!

Here are some photos of Giuditta Brozzetti:

Before concluding Part 1 and planning Part 2, I want to thank Marta for three really special days in her atelier (studio). She was really good to me and I will always cherish this opportunity from her.