The Creative Itch - Or Is It A Curse?

One of the big parts of being an artist is letting one's work just happen, and just go in whatever way it seems to want to go. This is one of the most amazing differences I've found between the professional, science-based, collaborative work I used to do with what I do now. Some of the most challenging and really difficult parts of being a weaver are also the most exhilarating and intriguing. And some of the most exhilarating and intriguing parts are also the most challenging and really difficult.

I recall making photographs for the Birch Card - posing the blanket in so many different ways on the birch branches, camera on tripod trying to capture the perfect pose. Ha, impossible. It was so difficult to get what I wanted - as if I even knew what I wanted (I didn't), but just what seemed right. But then it turned out not bad.

In a recent project of cotton blankets, I wanted to use colours that worked together as similar tones but which avoided my usual palettes of red/blue/purple or green/blue/purple, although they are just fine, and add some sort of new life to what I was creating.  I had so many colours on my work table, and I would group them and start weaving with one ... then I'd change it all by the second colour. And still not think it was right. It was like an itch I couldn't get to - like right between the shoulder blades.

Then the blankets were all unwound from the front beam and stretched out on the studio floor to be cut apart.

The blends are fantastic.  I love purple but I know not everyone does. However, what I've done, I think, blends in the purple very easily with blue and two close shades of red. It just totally works.

I should probably relax the next time I feel that unreachable itch, but I probably won't. I'll know though that I really thought out what I produced, or let it do its own thing - and at least I did my best.

This latest project was initiated by a request for a custom tablecloth. Along with the tablecloth, which would be woven at over 3m long, I decided to make more cotton blankets in the big diamonds and herringbone I enjoyed in my last towel project.

One more blanket is being fringed; all of the blankets below are hemmed, so easily machine washed and dried.


The other five cotton blankets are:


The last blanket will be personally delivered to Ottawa today for "Meet the Weaver" on August 14 at Alison's house. Let me know if you want the location and time to stop in.

Email ThisBlogThis!Share to TwitterShare to FacebookShare to Pinterest
Labels: What - Cotton Blankets

A friend of a friend of my sister was very interested in the idea of Cariboo Handwoven blankets from the Georgian Bay collection. We had a lovely email exchange for a few months (and got to know each other a bit in the process) and I designed and created two blankets for her.

Each blanket begins with shades of blue with whitecaps, then into grey granite with that bright orange lichen, then the evergreens - clumps of cedar and those beautiful solo windswept white pines, and then blue skies with puffy cumulus clouds. That's the sequence from one end of each blanket to the other.

One blanket is pure Shetland wool: 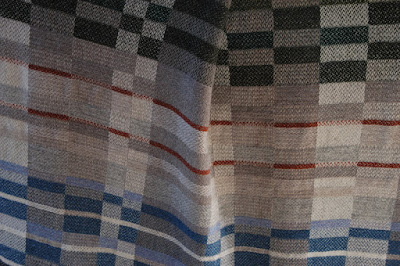 And the other is mixed with handspun mohair - I did the handspinning over the last long while and found lots of suitable colours from my archives: 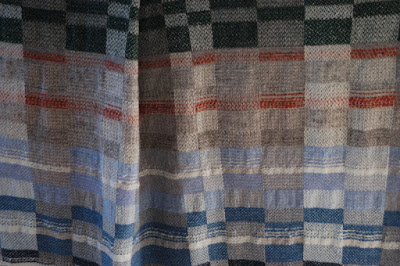 (Both photos show the water, rock and tree sequence and miss all the sky.)

The blankets arrived in North Vancouver today and here's what the buyer emailed to me:

I confess to high expectations, but must say that the finished product has exceeded them - I am thrilled beyond measure. The online photos do no justice to the colour saturation, nor to the texture of your work.
I will give you some respite, but you have not heard the last of me as a customer.

I was so thrilled to read her wonderful response!

I know I need to post better photos and I'm working on that, believe me. And, I have a new policy that anyone ordering from me can receive a full refund if what they receive is not to their expectations and they contact me right away and return the item quickly and in good condition. That means they can take the risk and only pay the shipping to and from their location.