Another set of Shetland wool blankets is ready for presentation, my twentieth. Three of them are available in Ottawa (noted below); the rest are in my studio in BC. The seven blankets represent a diverse set of ideas and fit into some of my ongoing series and collections. Here they are:

This is an exciting time of the year in many ways. These last days in most of Canada (I'm pretty sure) of beautiful fall weather and bright leaves contrast with the shortening days and the inevitable onset of winter. But for now we are drinking in this glorious feeling of autumn.

Autumn leads to Christmas craft sales and often the busiest time of the year for many artists and artisans. I thought I'd update blog readers on what Alison in Ottawa and Jane in BC are planning for the next few months. 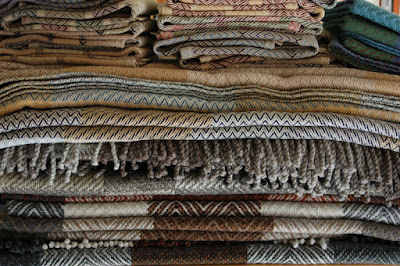 Alison will be hosting an open house in Ottawa on November 21, which she'll set up as an event on Cariboo Handwoven's Facebook page. Feel free to contact her at alison@cariboohandwoven.ca about what she has available.

Jane will be at the Medieval Market in Williams Lake, BC on the weekend of November 21-22 and informally hosting an open studio the week before. Contact her at jane@cariboohandwoven.ca if you'd like a sneak peak before the weekend or want to talk about an order for December.

Both Perry sisters are really excited about all the blankets and towels to show this fall. :-) :-)

Email ThisBlogThis!Share to TwitterShare to FacebookShare to Pinterest
Labels: When, Where

Canada's Forests in the Fall

As both a forest lover and weaver, it's intriguing and fulfilling to combine those two special interests of mine. I've woven quite a few blankets by now for my ongoing Autumn Storm series, and then I began a series called "Oh Canada!" to portray different aspects of Canada through handwoven blankets.

"Oh Canada!" began with a custom blanket woven for the 2015 Canada Winter Games, held in Prince George, BC last February. The organizing committee accepted my work for their VIP gifting program, and several of my blankets were purchased as gifts for, I gather, various national and provincial dignitaries who attended the Games for the opening ceremonies and other events. Yes, very exciting for me!

The custom blanket was entitled Canada's Forests in Winter. Each end was woven in shades of blue to represent the oceans. After the oceans was a deep layer of snow, then layers of branches in green and more snow, representing the link of Canada's forests from the Atlantic to the Pacific. 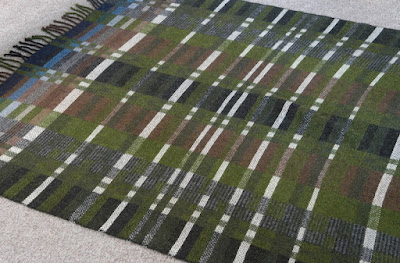 I decided to take this idea a step further recently, and recently wove a blanket entitled Canada's Forests in the Fall. Again, each end of the blanket begins with blues to represent the ocean. From there, one side is predominantly reds, oranges and golds to represent the colourful Acadian and Great Lakes - St. Lawrence forests west of the Atlantic Ocean. 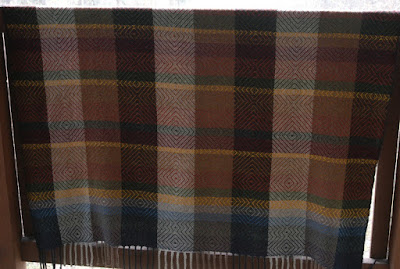 The other half is predominantly rich greens with spots of golds and yellow to represent boreal, montane and coast forests with their dots of bright aspen, birch and shrubs. (Thanks to my ancient university copy of Forest Regions of Canada by J.S. Rowe 1972.) 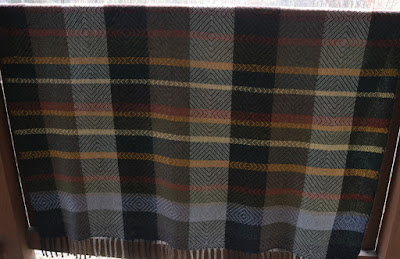 Often at the end of a warp for cotton towels or blankets comes a short section of yarns that I refuse to waste. (Or, worse yet, one section will be short by one turn from beaming, and so I'm left with extra warp on either side of this short section. Fortunately, that happens less often these days.) However, my error gives me the opportunity to make little kitchen cloths, as I call them. Kitchen cloths are little towel samples with selvedges or machine hemming on all sides, so they're durable in the wash and useful as towels for many years.

Kitchen cloths are handy as:

One of the ways I can invisibly link different friends, without them knowing, is to give them matching kitchen cloths. This happens, for example, when I wrap some of Pat's flatbread in a kitchen cloth for a friend, and another friend will receive her kitchen cloth wrapped around a CD. 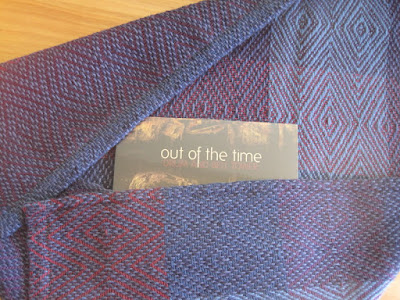 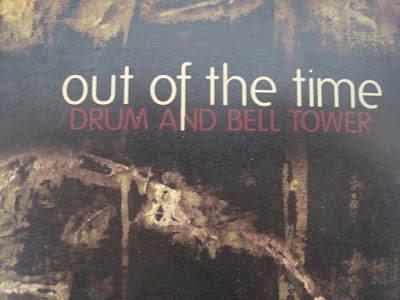 (Allow me to please do a little shout-out for the latest album by Drum and Bell Tower  - Out of the Time. This is incredibly good music and I want to share it with everyone.)

If I have a kitchen cloth left to use for myself, then I have that little link with my friends, too.

Weaving brings us all together. :-)