One project I enjoy now and then between all the blankets is a set of towels. After working with lovely wool in heathery tones and beautiful shades, I'm ready to strike out with simple cottons and bolder colours to create something that is often in high demand.

Here's my latest batch of cotton towels. Some are headed to Ottawa, and some to the Station House Gallery show in November where I'll be exhibiting with potter Joan Beck for our show "To Drive the Cold Winter Away." 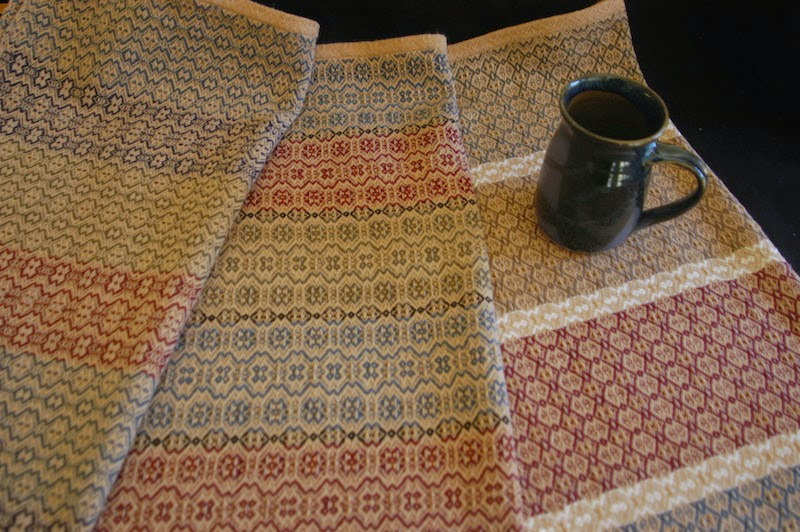 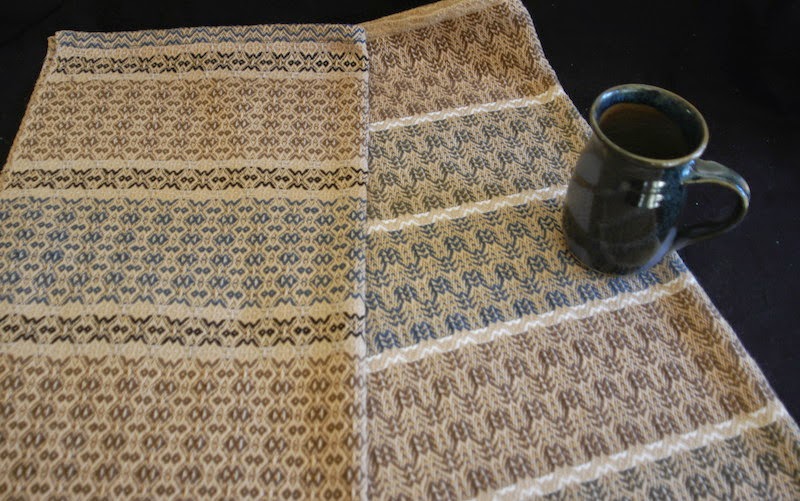 (Yes, that's one of Joan's mugs that's been in frequent use here at home.)

Working with yarns inevitably means working with knots. (Tangles are another matter and I won't get into them now.) As long as spun yarns end before the yarn's final desired length is reached, knots are required to extend their length.

There's an important distinction in where knots are acceptable and not. Knots in the warp reduce a lot of waste and are pretty essential. When the weaver knots two yarns together for a warp end, enough extra can be added so that the knot can be carefully undone and the ends spliced in. It depends on the yarns and weave structure, but tapered ends usually fit in very nicely and the splice disappears after washing.

Knots in the weft, however, are generally not allowed. When winding onto bobbins, if I feel a knot whizz through my hand, I'll stop, back up, find the knot and break the yarn. I'll find the break when weaving and can splice in the two ends, usually at the selvedge, which is again invisible after the fabric is washed.

The knots that really bug me are the ones I discover in a finished piece. Yesterday I found one in one of the bath towels that went out for selection. How did that ever slip by? I should have seen the knot during the weaving, or the pressing, or during the final inspection. However, I obviously missed it. In two minutes or less I can fix it. But seeing that flaw jump out at me showed me how, as thorough as we may think we are, that "human error" factor usually jumps in.

To anyone who finds a knot in a finished piece of mine, my apologies. The knot slipped through several stages in production, but I should have found it and fixed it.

Email ThisBlogThis!Share to TwitterShare to FacebookShare to Pinterest
Labels: How

"There's no such thing as a failed experiment" is my adage - moreso, I find, in middle age. Often, a new way of doing something, even if not necessarily approached voluntarily, can lead to interesting discoveries and profound improvements. Or, if not, at least one knows more now than one did.

Along those lines are these blankets. I wove them in advancing twill and made the second one part of my Autumn Storm series. It is another blanket that tells a story: one end is predominantly heathery orange and rich greens, then the grey clouds move in, then the other end is mostly greens of the conifers with the coloured leaves gone.

Here's one of the advancing twill blankets in detail. All photos in this blog are by Pat Teti who used a temporary line of coloured thread to return to the same spot for comparison.


The beautiful advancing twill weave structure creates a lovely movement to the eye, but the second blanket had long floats of individual threads throughout.


As a blanket, I was afraid that the floats would catch and pull which would soon make it a mess. I wasn't sure what to do about this. So I tossed it into the washing machine on a regular cycle with the laundry. I knew this would felt the blanket considerably and lock in the floats.

The blanket was waiting for me at the machine door when I opened it. Wow!


It has indeed felted and shrunk to a width of 107 cm and length of 132 cm. It's rather gorgeous, I think, and the felting has softened the colours and colour shifts. All that take-in has made it pretty thick and heavy. It's still a very nice size as a blanket, but just not the type to wrap around the user as much as all my other blankets do.

I certainly won't be felting all my blankets, but this one is rather special. I consider it another successful experiment.
Posted by Jane Perry at 07:22 No comments:

Email ThisBlogThis!Share to TwitterShare to FacebookShare to Pinterest
Labels: How, What - Wool Blankets

I've used advancing twill before for towels and wanted to try it with this next set of Shetland wool blankets. This project gave me a huge chunk of ideas that I can work with and use for a long time. It also stretched me mentally and just about knocked me out physically, which I love about weaving.

Some of my new ideas while weaving these blankets include a new Energy series of blankets (SH083), which I'll add to when specific items seem suitable. Another blanket is a new addition to the Autumn Storm series and it's a blanket that tells a story and also includes a felting experiment.

My earlier blog on bath towels led to packaging and delivery and ... oh wow, feedback like I never imagined.

The friend who requested the blue and green ones bought all four: two for her and two as a wedding gift for a young couple.  Here's part of what she emailed me:

I had already decided last night that we were going to keep two of the towels, because I had a bath and tried one out and loved it…. THEN I REMEMBERED AN IMMEDIATE WEDDING GIFT I NEED!!!
Wedding gift need + Jane’s weaving = PERFECT SOLUTION. She will absolutely adore the towels and I think nice (really nice in this case) towels are essential when you begin a new life. People will see [my] towels at least when they use our bathroom! I will be bragging about them when possible…..

The other friend went a bit happily nuts on Facebook and posted photos of her beautifully remodeled bathroom. And here's what she said to me:

Woweee!!! Those are some GLORIOUS towels! I feel bad calling them 'towels' actually...works of art is much more appropriate! 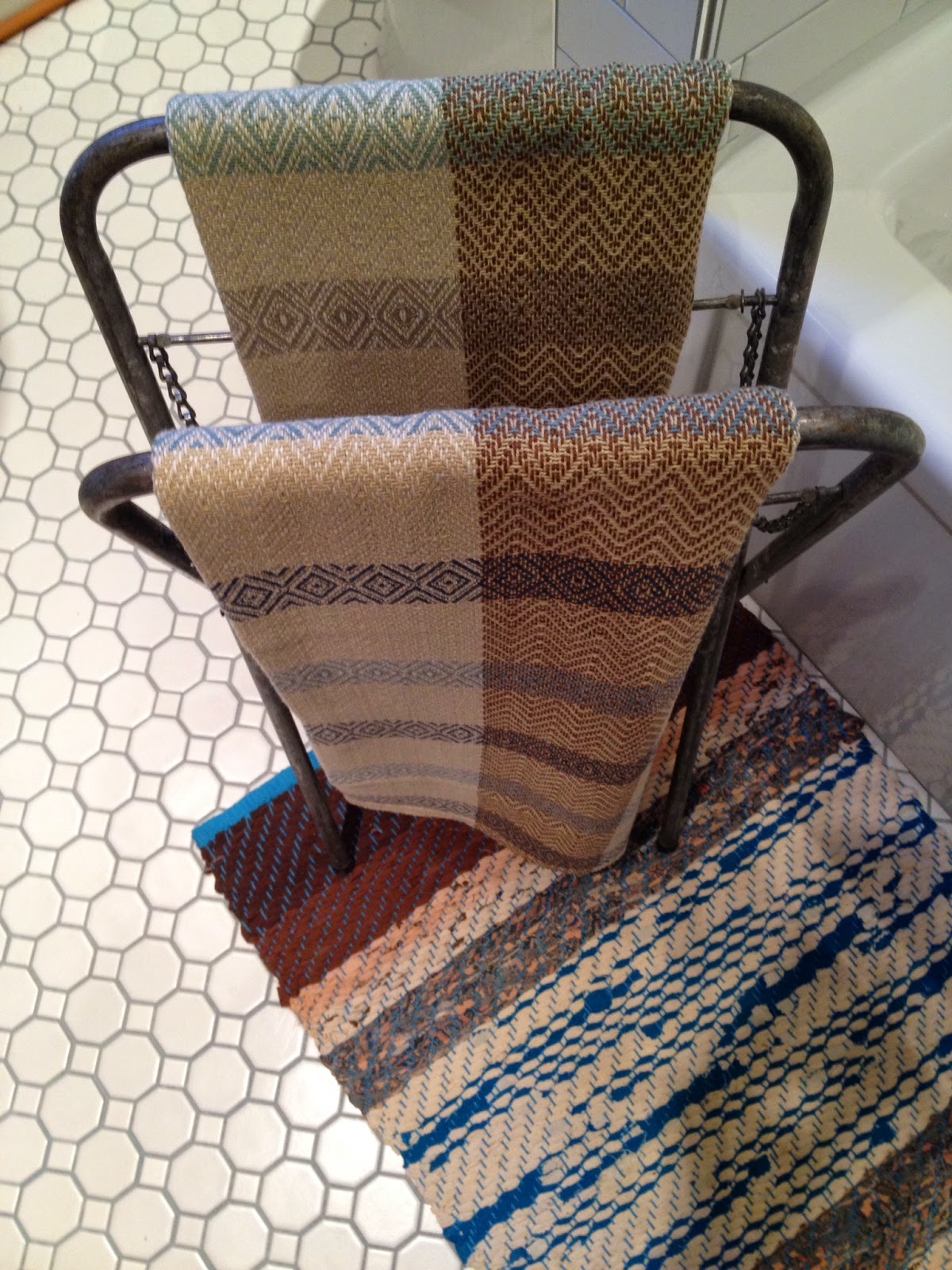 M. and I are just so impressed, and your personal notes and packaging were just the icing on the cake! And if you get a hankering to do any hand towels, I would love to add a couple of them to the collection!

These two examples show once again that, while Cariboo Handwoven is just a small business, it is responses like these that make me feel rich.

By now I've sold hundreds of cotton hand towels for the kitchen or bathroom. Coincidentally, two friends recently requested similar towels but in a bath towel size. I noted their colour preferences and finished this project last week.

One friend bought some hand towels in blues and greens that she really liked, and here are samples of the bath towels inspired from them. 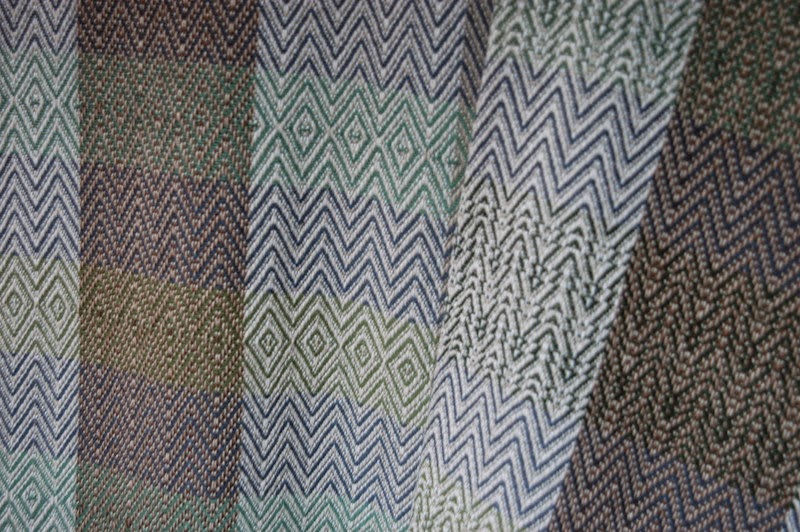 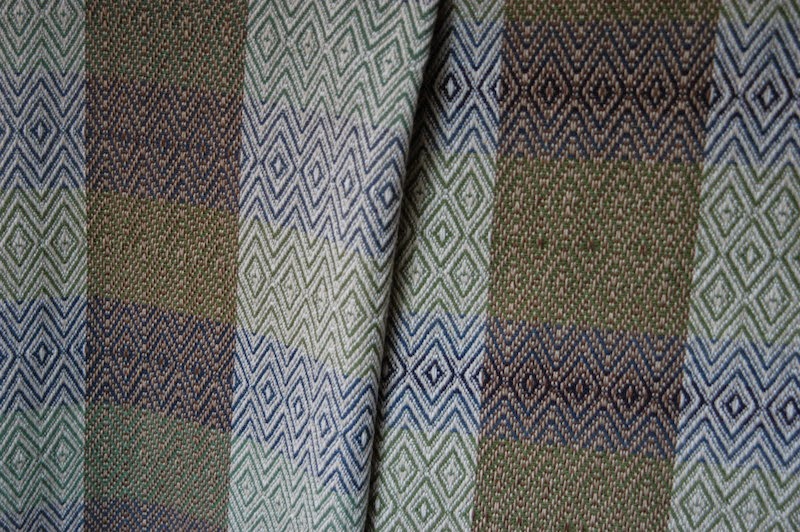 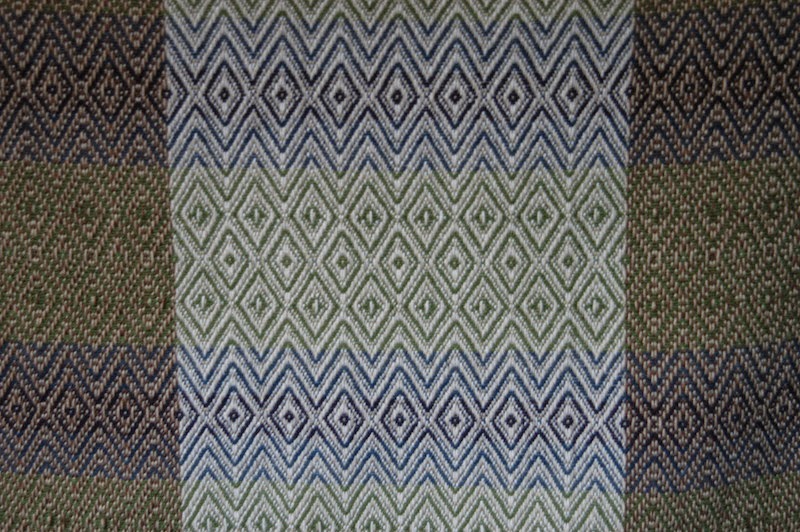 The other friend just remodeled her bathroom and had a key colour for bath towels of a pale teal. I had the perfect match in cotton and enjoyed combining it with other colours. 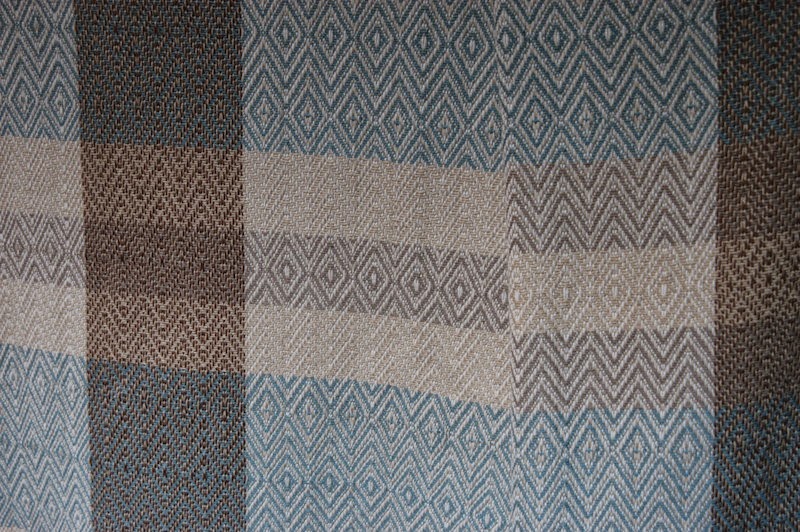 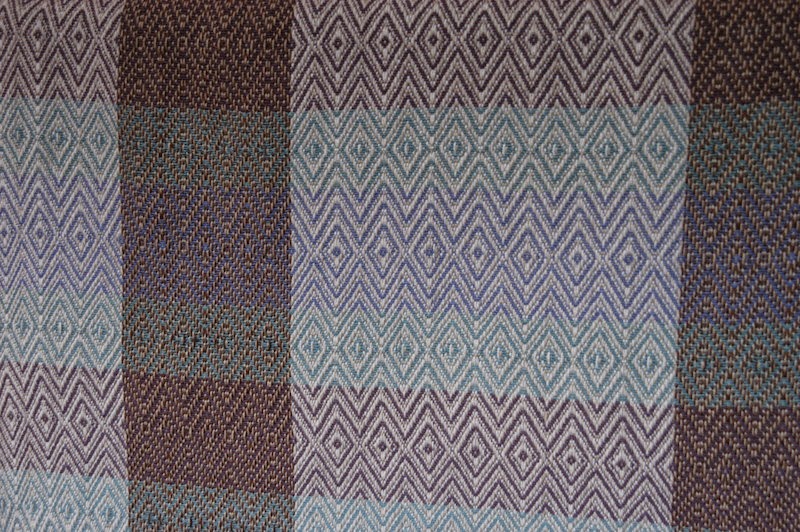 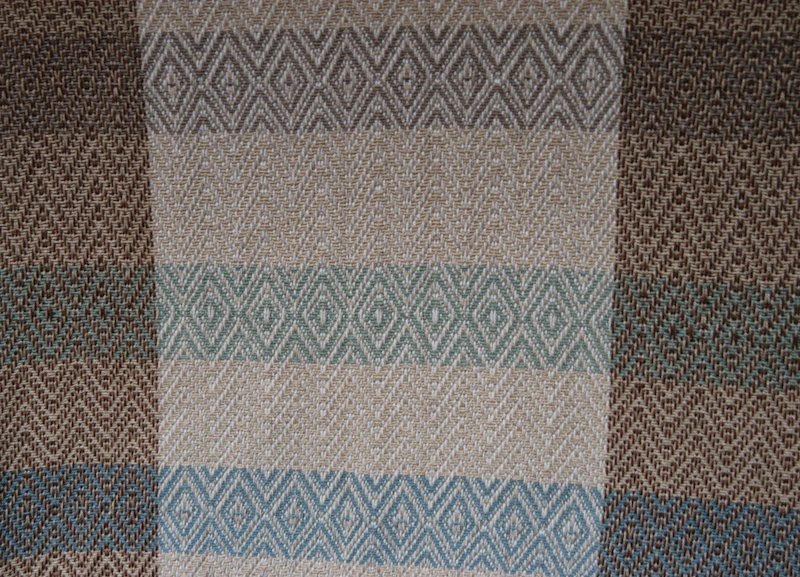 All of these towels should be as absorbent as my smaller hand towels. I hear over and over (and don't mind at all) that my towels are very absorbent and work really well in the kitchen or bathroom. The cotton I use is great, plus I weave in twill structures with thread "floats" that pick up moisture. But I'm very interested to hear how these towels work - are they absorbent, is the size about right, how suitable are the colours based on the initial intentions?

Neither of these projects are commissions and no one has any obligations or expectations. However, early responses from loom photos were very positive, and I'm curious to know if that continues when each requestor sees the real thing.

Advancing Twill Blankets on the LIne

Today I washed three more Shetland wool blankets woven in advancing twill, and here they are drying on the line. 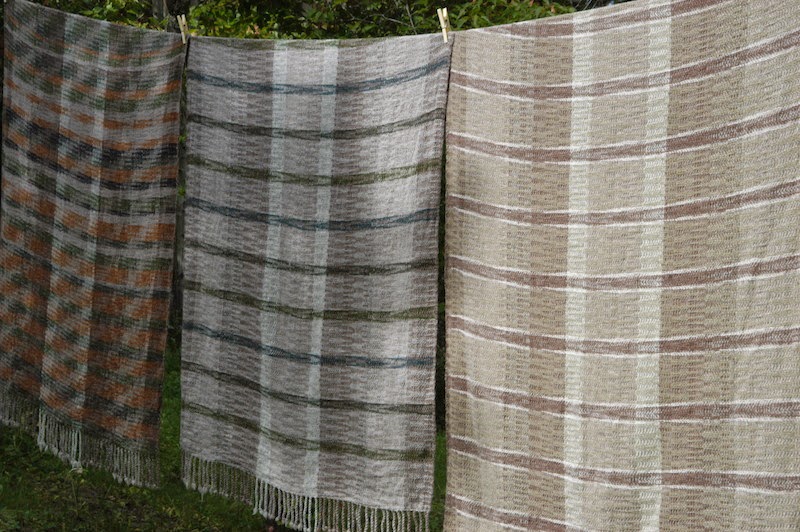 I'll be posting six of the finished blankets soon, with individual photos and measurements.
Posted by Jane Perry at 11:42 No comments: