This will be my last blog of 345 in almost eight years of blogging.  Blogs have helped keep me connected with readers, organized with my projects and other work, and clear in how I want to present myself to the world.

However, it's time for a change.  I have a new and improved website with a Gallery for posting my latest blankets and other items, and I'll be setting up a "Where to Find" tab at the top for posting my upcoming whereabouts at markets and craft fairs.  This should be easier and more organized for anyone trying to find what's available or where I'll be.

I was really honoured to be awarded as one of the Top 100 Weaving Blogs in 2017.  Feel free to check my blogs in future if you need any references or ideas.

Thank you, readers!  And happy weaving to you weavers!

End of Year Thoughts and Feelings

At this busy time of year, we in the northern hemisphere have been eagerly awaiting the winter solstice today while running around getting ready for Christmas.  For artisans who sell their work, this time of year has the added bonus of craft fairs and restocking their gallery outlets. This makes it all very engaging and fun!

And for those artisans, the last two or so months of the year constitute a good portion of annual sales.  It's true for me and I know for many others.  Once Christmas arrives, we are pretty well sold out in our studios and at our outlets.

My main aim is to make more, not to get rich or try to satisfy detailed custom orders.  I just want to have fun at my looms and see what I can create.  I call it exploration without travel.  Then if people like my work and want to buy it (or receive it as a gift from me or someone else) that really tops it off for me.  Again this year I received so many lovely, heart-warming and inspiring comments about my weaving - people say it's beautiful, it lasts for ages and it's special to the owner, whether it's a blanket, towel or scarf.  Those comments mean the world to me.

But knowing I have 2020 ahead of me to make more is a lovely feeling.  I have a special order of pool towels with samples to first be made and shipped to California.  At the medieval market here in November, a customer gave me a great idea for a new, really innovative product that I am dying to make and see tested and refined.  And I have barely any cotton blankets left and they're on my list, too.

So while I may feel a little overwhelmed at this time of year, I am pumped for 2020.  It's a wonderful feeling inside me and I can't wait.

Email ThisBlogThis!Share to TwitterShare to FacebookShare to Pinterest
Labels: When, Why

Fort St. James is almost in the middle of British Columbia, since it's about 70 km north of famous Vanderhoof, the geographic centre of BC. Vanderhoof is an hour's drive west of Prince George, and PG is 250 km north of me. It's a beautiful trip.

I went up last Friday for their craft sale on the weekend. I was fortunate to stay with a very good friend who is not only a superb cook but an excellent companion and helper in my booth. I do love Fort St. James for its indigenous heritage, interesting history with the Hudson's Bay Company, the beautiful site on Stuart Lake, and the great people.

I arrived in the last of Friday's daylight and took a walk along Stuart Lake.


On Saturday we had a little surprise at breakfast: the power went out. Texts to others confirmed it was a widespread power outage but we decided to head in to the high school and see what was happening. My props were already at my booth so it was just a matter of carrying in bags and baskets. People were setting up in the dark! 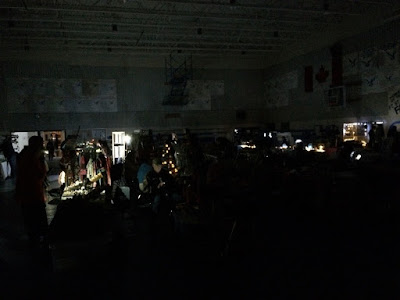 However, by about 11:00 am, we knew the outage was expected to last until 6 pm, and were told that the day's event was cancelled. Later, I received an email saying that Sunday's hours were extended from 9-5 to make up for Saturday.

With some welcome light, here's our booth almost ready to go on Sunday: 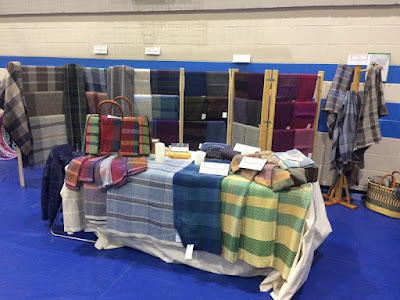 And then we had a super day with some introductions and re-introductions for me; major interest in Cariboo Handwoven blankets, towels and scarves; and very good sales. Thank you all!

Fort St. James not only has a very good craft fair, but amazing people who are not deterred by their apparently regular power outages. They're ready both logistically and mentally. They carry on and don't grumble, which is a really good example for the rest of us.

Email ThisBlogThis!Share to TwitterShare to FacebookShare to Pinterest
Labels: Where

After my second season at the Williams Lake Farmers' Market, I'm looking to fall projects and craft fairs. But first, I want to send huge thanks and and an attagirl each to market manager Jane Bowser, and market promoter extraordinaire, Barb Scharf. Without those two, our market would not be the success it is today. I had a lot of fun setting up each of the six times I had a booth.

And I enjoyed seeing friends and visitors, lots of hugs and getting to know my vendor neighbours. I look forward to next year. Thank you all!

Now that we're into fall, with registrations and questions flying around, I want to outline what I'll be up to next.

First up for me is the Fort St. James craft fair at the high school:

I went about three years ago and had a great time, met lots of people and stayed with super friends who are both good cooks. :-)

The following weekend is the heralded Medieval Market in Williams Lake.  I'll be in the gym again, possibly against the back wall.  Lots of buzz is growing here for the Medieval Market! 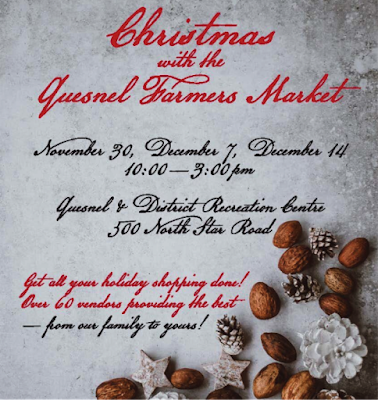 If you can't make it to any of these events or you're just not crazy about the crowds (especially at the Medieval Market although Sunday afternoon tends to be quieter) ... you can request a studio visit. We can arrange an appointment time, I'll give you directions, and I'll be organized and set up if you're looking for anything in particular.

Until then, enjoy the bright fall colours, the swirling leaves, the mellow sunlight and the sighs as the days grow shorter and the nights longer.

Email ThisBlogThis!Share to TwitterShare to FacebookShare to Pinterest
Labels: When, Where

I've been working with local fleece for quite awhile now and am always on the hunt for something new and interesting. A new relationship and friendship often develops as the producer and I get to know each other over the years. The Cariboo hosts a variety of sheep breeds that produce some very high-quality wool for spinning, such as Icelandic, Shetland, Romney and Texel. And lately I've been finding new producers, including one in the Chilcotin, to the west across the Fraser River.

I've said for years that I'd rather spin with roving that's ready to go rather than mess around with dirty fleeces through the washing and carding phases. But to support local producers, I need to be a little more resourceful and do a little more of the work. And that work is actually proving to be pretty fun and fulfilling.

A local spinner has been linking wool producers with spinners and fibre artists for a mutually beneficial arrangement. Sheep need to be sheared every spring anyway, and she is helping spinners connect with local producers who have some beautiful fibres to work with. Here's how she puts it:


For me it is the tactile feel of the fibre. From the greasy, dirty fleece - you can almost feel the life of the animal - to spinning the fibre and either knitting or weaving the yarns into something you can wear. It is a wonderful journey.

She came over this spring with all her washing bins and equipment, and she showed me how to wash fleece: hot water with Dawn detergent and minimal agitation, followed by two rinses. 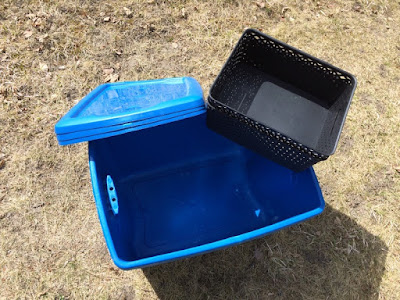 Then hang to dry in a flower/herb dryer (a perfect design for wet fleece). 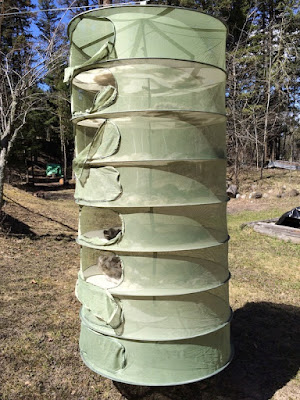 Once the fleece is dry, it is handcarded, spun and often-but-not-always plied for weaving. That's a fair bit of effort but I find it enjoyable.

Here are three blankets I wove this year. I love them all!

The first and third blankets have beautiful striations of dark and light shades that really add depth and interest to the finished product. These blankets will last for ages and look beautiful through their lifetimes.

Email ThisBlogThis!Share to TwitterShare to FacebookShare to Pinterest
Labels: How, What - Wool Blankets

My idea for these blankets was brewing for awhile, so I was happy to receive my order of cotton yarns and dive in. The lengthwise stripes are threaded in diamonds of advancing twill, which creates shadowy and sometimes rather mysterious effects that I really like. These blankets are 100% cotton, hemmed, machine washable and dryable, and lovely to use in the summer.


Let me know if you're interested in any of these blankets. You can leave a comment below or email me at: cariboojane "at" shaw.ca
Posted by Jane Perry at 12:59 No comments:

Email ThisBlogThis!Share to TwitterShare to FacebookShare to Pinterest
Labels: What - Cotton Blankets

At the recent (and wonderful) conference of the Association of Northwest Weavers' Guilds in Prince George, I spied an interesting corner of the vendor market piled high with beautiful handwoven baskets from Ghana.


At the vendor market at any conference, you have to think about your possible purchases and kind of plan it out. So I did and I had a plan - to buy one basket that I really liked. But when I went back on the Saturday morning and talked to owner Karie it turned out she asked me a wild question: "Would you like to be a supplier of Big Blue Moma baskets?" She said she didn't have anyone in my area and she explained the conditions.

So ... I bought twenty baskets! It was really fun to pick them out, thinking of what I like and what I think other people will like. What a dream task.

I brought them home and needed to reshape some of them. This is an under-one-minute job for each of wetting the squashed area and reshaping, then leaving to dry. 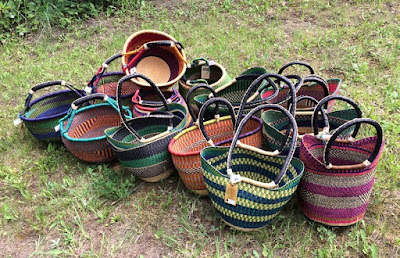 And they're ready to go now. Cariboo Handwoven has six styles available in my studio. (Since I didn't make them myself I cannot sell them at craft fairs or the farmers' market.) These are high-quality baskets and I'm proud to add them to my Cariboo Handwoven inventory of blankets, towels and scarves.

Right now I have several colours in each style. All baskets are large but they vary in exact sizes - best to see them for yourself and compare. Here they are:

For the next month, until July 22, all basket prices are reduced by 20%.  (GST and PST will be additional.)

Let me know if you're interested in a studio visit or a meeting in town with a few baskets you might like tossed in my car.

Thank you, Karie - it was great to meet you and do something I NEVER IMAGINED DOING!