Going Back in Time

Taking a break from the major interruption in so many lives - yes, I am still evacuated and unable to be in my studio ... so let me go back in time for a moment.

When you've been pumping out a lot of handwoven blankets and towels for the last few years, I guess it's inevitable to look at something from earlier and think ... "Wow, that's not bad." Or, "Hmmm, I actually did that?" Most of my projects are original patterns designed from scratch because if I want to continue a design into another project with new colours, by the time I get to the actual warp threading I'm on to something new, something I just must try, something (maybe?) better.

Recently I took a big cotton blanket from my studio that has a lengthwise threading error and started using it in the house. I always want to know how my blankets and towels 'work' in daily use, beyond all the really nice comments I receive. I need to know for myself. So this slightly flawed work I took out of the inventory to test and scrutinize in regular use. I looked at it after awhile and thought - that's not bad. It's just herringbone in alternating colours in the warp. It's so simple and yet so rich and interesting. Hmmm, maybe I should go back to that and see what I can do now?

That's inspiring! Hope I'm back in my studio before long.

Email ThisBlogThis!Share to TwitterShare to FacebookShare to Pinterest
Labels: How, Why

The Misleading Simplicity of "Evacuate"

My last post was about British Columbia's war on fire but our love and understanding for each other. Thanks for all those pageviews, I loved to see every one. :-)

But when things get really smoky and imminent, you make the voluntary decision to leave before it's mandatory. There's not much I can do to prevent my house from burning, but to get out of the smoke and risk as easily and safely as possible is probably a good idea. My studio essentials were packed last weekend in a handmade grass bag from Ghana - which represented about 1% of all the material there. Here's that special 1%:


As well, I brought:

Then things then got bulky after what I next crammed into my car:


The interesting thing about evacuating is how personal it is.  After the obvious essentials like some clothing, toiletries, important documents and any medication, each of us makes countless decisions as we roam through our house. (And ruminate in the middle of the night with a promise to add one more small thing in the morning.) I've had an evacuation list ready each summer probably since the fires of 2003, but this one got more serious.

Some people focus on memories, others on having what they need for the future.  I think I'm in the middle. :-)

The actual simplicity of evacuation though is really how little we need when we have each other.

Email ThisBlogThis!Share to TwitterShare to FacebookShare to Pinterest
Labels: How, Why

War on Fire, Love for Each Other

This blog post has little to do with weaving, but of course I will find any opportunity I can.

I live in the midst of a current wildfire inferno, brought on by high forest fuel loads from decades of successful fire suppression and augmented by an incredibly dry late spring and early summer. June is typically pretty rainy where I live, at times exasperatingly so, but we had only a few millimetres of rain this June and none yet in July.

On Friday afternoon, dry lightening hit my area and new fires were being reported too quickly to be recorded at first. The local fire centre at the airport was closed because the forest on the other side of the runway was in flames.

And no one's life has been the same since.

I know it's not really war on fire. Wildfire is natural and we humans have become too successful in putting out almost every one of them, to the point that when exceptional conditions permit, a fire burns exceptionally hot and erratically. We can't do much in response until we have significant rain, even though British Columbia has some of the best personnel, expertise, perseverance and equipment anywhere. And everyone out there is working hard and doing their best now, I know that. Thank you from each of us to each of you.

I've met friends who aren't sure whether to evacuate to a distant, safer community or stay put in maybe higher risk but where they know they belong. One dear friend just lost his home, he was told while quite far away. Everyone wants to help each other out, we need that important job to do. We are all on our best behaviour and our best manners because we care for each other and we're being kind and courteous. And loving.

I've said good-bye to my weaving studio and I hope to say hello again, but we'll see. My best blankets and a heavy armload of towels are as safely stored as I can hope for. Until we know more, take care and stay safe, my friends. Love.
Posted by Jane Perry at 20:58 1 comment:

Imagine my surprise to check email first thing one recent morning and find the amazing news that Cariboo Handwoven's blog was chosen as one of the top 100 weaving blogs by Feedspot. There we are at #63. (Or find the website at http://blog.feedspot.com/weaving_blogs/.) 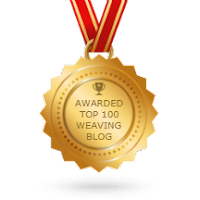 Thank you to Anuj Agarwal, Feedspot founder, and the blog selection panelists. Perusing the list of blogs, I feel honoured to be in such good company.  There's Laura Fry, my neighbour north in Prince George, at #27; Susan Harvey on Vancouver Island - she also does amazing work - at #49; and Dianne Dudfield in New Zealand at #93 - my sister saw her work when traveling in NZ and I've been a big fan of Dianne's since. And there are other good ones that I also subscribe to or check regularly.

The Feedspot list is a goldmine of 99 more weaving blogs that interest me. Thank you for adding me to this esteemed list!

Email ThisBlogThis!Share to TwitterShare to FacebookShare to Pinterest
Labels: Who, Why
Newer Posts Older Posts Home
Subscribe to: Posts (Atom)