A friend requested a set of placemats with a table runner to match the popular stoneware made by a local potter, Joan Beck. I also wove some towels to accompany Joan's classic colours of pale green, an intense blue and medium brown. No cotton sample colour came close to the unique blue glaze Joan uses, so I alternated navy and periwinkle instead and that worked well.

These towels are some samples of my initial collaboration efforts with Joan Beck's pottery: 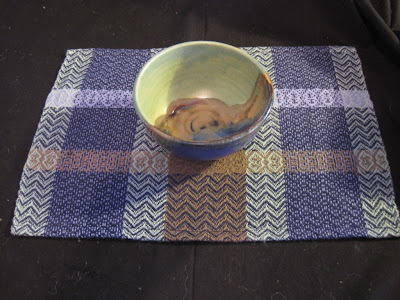 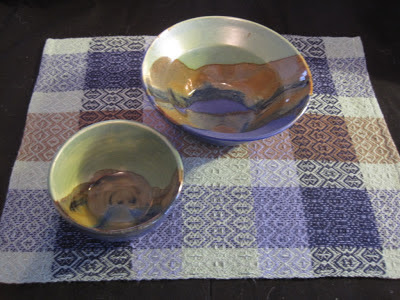 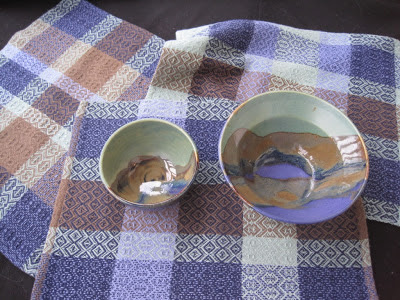 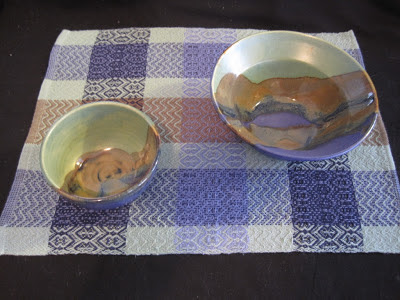 The Long Life of a Blanket

Cariboo Handwoven blankets last a long time. I like to point this out because it helps to show the value of something that is handmade and well-made, in contrast to a similar machine-produced article for a lower price.

A local friend owns a long-wearing wool-blend blanket made of Bergå wool from Sweden with handspun wool and handspun mohair. It has softened up very well with use, and all it needed to improve its looks was a careful handwashing and a few minutes of brushing to remove the "pills."  This blanket looks new again and yet it's probably close to 20 years old. Thanks to TM for this photo: 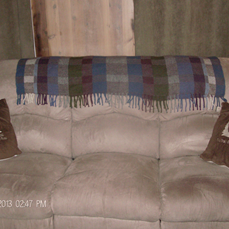 Over time, Cariboo Handwoven blankets soften up and are nicer and nicer to use. Any pills can be easily pulled or brushed off. These blankets actually improve with time - just like all of us. :-)
Posted by Jane Perry at 08:32 No comments:

Email ThisBlogThis!Share to TwitterShare to FacebookShare to Pinterest
Labels: Vintage, What - Wool Blankets

Following up from a recent blog on 24 towels, here are the results of my collaboration with SK to weave her four towels: 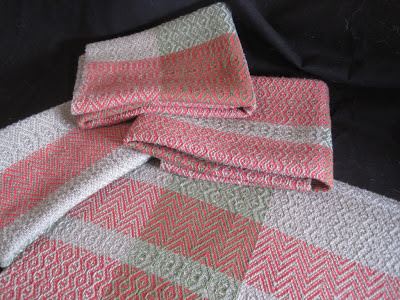 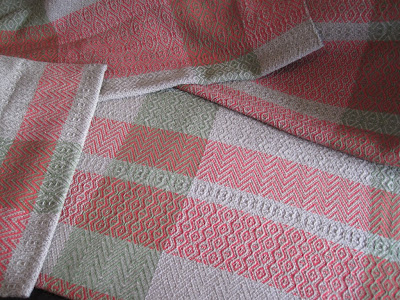 And here's what she said in her email:

"I just picked up my towels about 10 minutes ago.  They are absolutely gorgeous!   You have done an amazing job!   You won't believe how well the colours work in my home.
Thank you! Thank you! Thank you!
I already put one out to start using today :)
I am extremely pleased with the way they turned out."

Who doesn't like feedback like that?!  Thank YOU!  This was another enjoyable towel project and these four towels worked well with the other colours I wanted to use. I'm very grateful to SK for her inspiring response to her new towels.

My sister has this Cariboo Handwoven wool blanket in undulating twill available at her house in Ottawa. It's number B135 and it looks really nice on her chair by the fire. Approximately half the blanket is woven with handspun Shetland wool, making this a sturdy, cozy blanket. The price is $280. 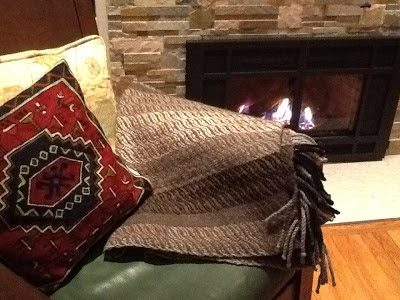 Two friends in Almonte, Ontario remodelled their kitchen in 2011 and I sent them some waffle weave towels as a little kitchen-warming present. 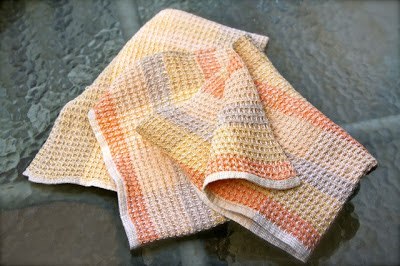 They loved them and she ordered six Cariboo Handwoven towels in predominantly sky blue and butter yellow, to give as gifts. The order doubled when she saw photos of them on the loom! 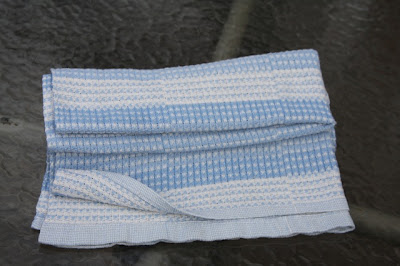 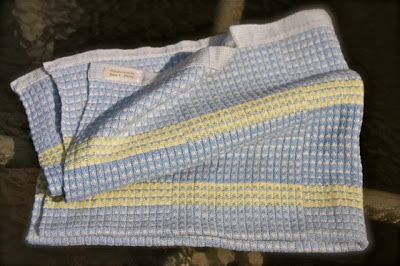 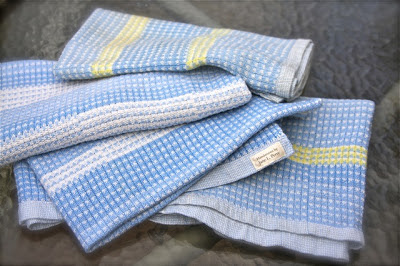 These towels are in a variation of waffle weave and have blocks of colour shifts where I altered the threading order in the warp. Easy to do and interesting effect.

I've just finished another big towel project. It was initiated by a commission for four towels to go to Ottawa. I worked with the designer to select colours that matched her newly painted kitchen through email and colour samples, which was fun to do together. She wanted the same weave structure, complex twills, as she'd seen in other towels but in "her" colours.  I ordered the yarns and wove her four towels ... and 20 more.

I won't show the commission towels until they're received and approved ... but for now, here are samples of the others. 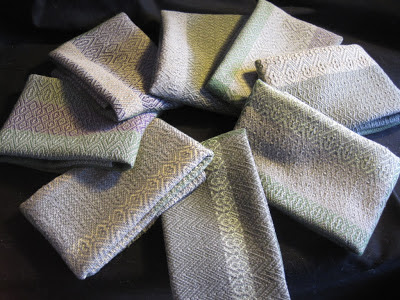 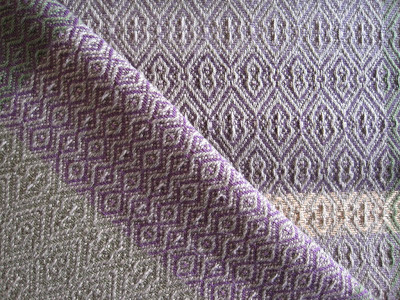 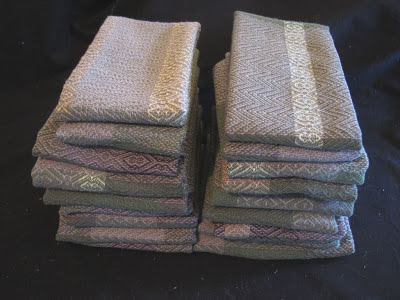 I used two dyelots of olive green: the lighter shade worked really well with the light grey, and the darker version was perfect with the medium green that is a lovely verdant shade. I first wove with various combinations of the warp colours and then began using yellow, Tuscan gold, and a few shades of mauve and purple. The towels looked great on the loom but even better when washed and pressed.

Thank you to SK for the inspiration for this project. I'll reveal her towels later.
Posted by Jane Perry at 09:03 No comments:

I just reached 1,000 pageviews - from an iPad user browsing with Safari from the United States.  That's all I know.

The next big milestone of five digits will take a long time, but reaching one thousand pageviews is exciting for me. Thank you, blog readers!
Posted by Jane Perry at 13:22 No comments:

Email ThisBlogThis!Share to TwitterShare to FacebookShare to Pinterest
Labels: Who

A Wool Blanket in its New Home

This Cariboo Handwoven wool blanket was purchased last week as a special birthday gift. The giver and the recipient are sisters and both are friends of mine. About half of the wool is handspun Shetland, the dark brown going across. This is a sturdy, warm blanket and I've already heard it's being enjoyed and well-used. It has a nice backdrop of the Gatineau woods in Quebec here in its new home: 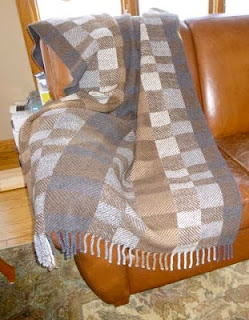 I'm always delighted to hear how suitable a new blanket or towel is for its owner - that's a big part of the joy and fulfillment of creating anything. And this blanket will last for many, many years.