I just hemmed 34 towels in two days, and I did lots of other things, too. Twenty of those towels were delivered right away to the weaver, Jon, and the other 14, which I wove, were hung to dry on the line - some of which are here. 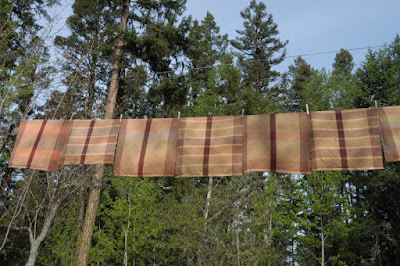 Jon and I beamed the old loom in January with a very long warp for towels. The plan was for each of us to pick away at it until the warp was done. After he began and then was away for awhile, I wove what I thought was 8 or 10 towels. 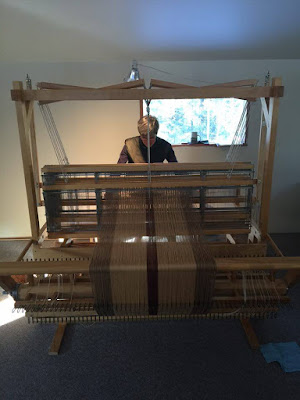 He continued through March and April, and cut off the warp last Saturday. I was glad he had the amazing experience of unwinding the front beam into his lap and then unrolling the very long warp on the studio floor. 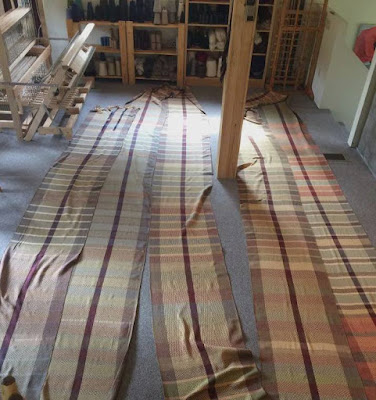 It made a few passes back and forth, and then he separated the towels by cutting them very carefully and stacking them. Over to me for the hemming.

I've never been crazy about using a sewing machine, and even less about hand sewing. But if I'm going to weave towels I need to hem well. After a few thousand hems, I'm getting to be not bad. I've never met a sewing machine that lacked a bit of personality, but once I get going into the stack of hemming it can actually be hard to stop. The Zen of Hemming. Just like weaving. :-)

Towels are so fun for experimenting and feeling carefree with crazy ideas. I won't do that with blankets, as I've probably emphasized already, but towels are a little test piece for a new idea or something. They all end up selling anyway. 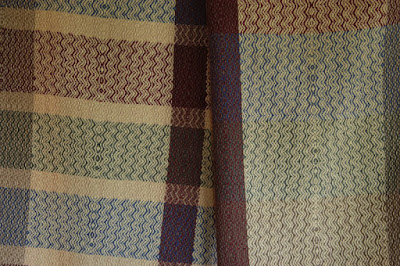 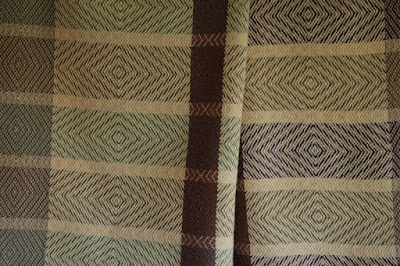 Thank you, Jon, for a very enjoyable collaborative towel project. (We collaborated on the blog photos, too.) I look forward to more weaving fun together!

Email ThisBlogThis!Share to TwitterShare to FacebookShare to Pinterest
Labels: What - Towels, Who

I've always considered advancing twill pretty interesting. It creates complex patterns with only one shuttle. It's also fairly easy to weave with many variations that one can dream up and test. What gives advancing twill its uniqueness is the length of each "run" of the twill and then the offsets between runs. Heddlecraft's first issue early this year included a great article about advancing twill - all the principles I wanted and needed to know. Perfect timing!

Towels are always great to test what I want to try - and to learn from there. I would never do this with blankets when the materials for each blanket, just the warp alone, are pretty costly. Towels, however, give me the freedom to experiment. Any duds are still usable if they're not good enough to sell.

For this project, my advancing twill run was five threads, and I had an offset of only one. Here's the start of the pattern threading:

Then I swung down from 81234 using harness 4 as the pivot point. For any complex threading like this, I test the threading on paper first by counting out the harnesses for each section of 24 threads and writing down the start and end of each section. This way I am fully confident I'm on track when I get to the actual threading. So, the first 24 threads are section one, then section 2 takes the next 24 threads for the 2/8 cotton I used. And so on. It's all there on my threading "map" before I do the actual work. Then I refer to that map throughout the threading process to reduce the chance of errors. 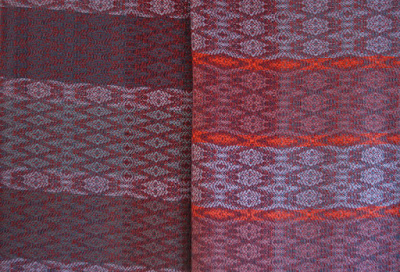 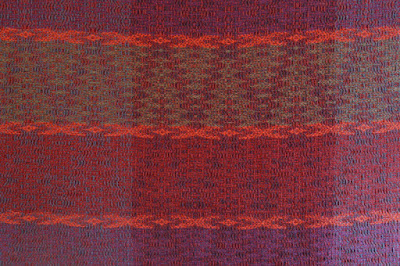 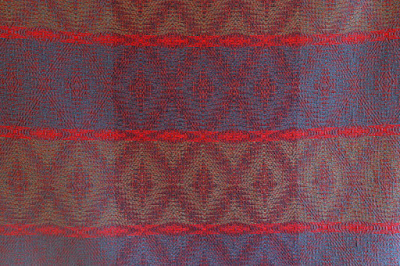 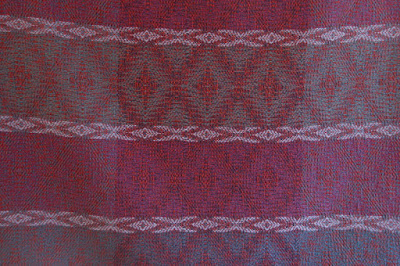 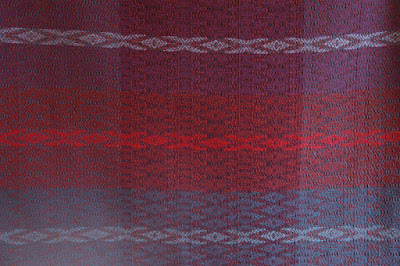 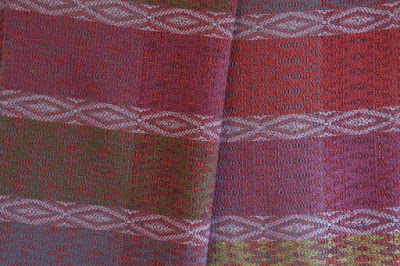 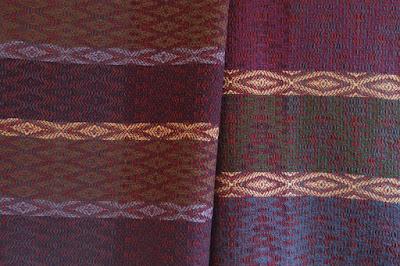 Next project? More towels just like this but in lighter colours - can't wait! 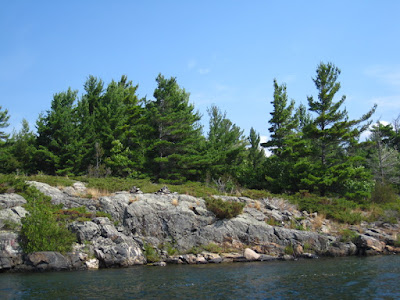 Last year I began applying my love for Georgian Bay in my blankets and towels. Previous blog posts can be found under the "Georgian Bay Collection" label on the right - this is the fourth.

A fellow British Columbian bought one of the Georgian Bay blankets for her aunt, then couldn't resist one for herself. They are quite different, but both are in twill blocks and have the same theme of water, rock, trees and sky. Those blankets are described in one of those blog posts.


The aunt is clearly delighted with her blanket. Here's what she wrote:

It makes my heart pound.
Maybe I'm seduced by the Georgian Bay moniker, but I love [the blanket's] hand, the gentle colours, the cleverness of it, and the merest of warm colour.  So real, so true to the inspiration.  My heart swells.  Thank you.
Every time my eyes land here, I smile and I feel warm even without being under the work of art.

Her last line "Every time my eyes land here, I smile and I feel warm even without being under the work of art" - now that is eloquent and really original. I was really touched - and inspired - to receive this feedback, and just had to share it.

One of my latest ideas, which has been rambling around in my mind for quite awhile now, was to weave big square scarves in fine cottons. I've been inspired to some extent by the common cowboy custom around this area of wearing a big neck scarf, originally printed cotton bandanas but now usually in a solid colour. There has to be a story or two behind this. Well, just google "cowboy scarf" and there are tying directions, shopping opportunities and more. A big square scarf can be folded diagonally, draped around the wearer's front, the ends crossed at the back, and then tied in front, either over or under the main scarf part.  Or, just roll up into a thick length and drape around the neck.

I now have a big selection of big square cotton scarves by Cariboo Handwoven. They are all about 60 cm x 60 cm (24" x 24") but please note that some are not perfectly square.  Each one is priced at $60 plus applicable taxes. Shipping should be easy and inexpensive because I can flatten one or two in a file folder and fit in a large envelope.

Please note whether any scarf that interests you is in mercerized cotton (shiny and not absorbent, but appears like silk), wool-cashmere (soft, definitely hand wash) or silk (hand wash and you're getting a bargain). The pure cotton scarves (with no mention in caption of any unique fibres) would also make great little traveling towels. I'll present the scarves by colour.


Black
Both black scarves would look great with a black coat or jacket.


Cream Silk
This one is gorgeous with very fine cream silk.  Hand wash only.